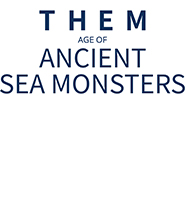 From Land to the Sea,

“THEM: Age of Ancient Sea Monsters - A Science Art World by ZHAO Chuang and YANG Yang” is a themed exhibition based on works by the two founders of PNSO and produced by Yiniao Sci-Art.


This is not just an exhibition about the story of an entire ancient sea world that has been extinct for million of years, but also an exhibition that has a story for everyone. Science artist ZHAO Chuang has perfectly combined art and science by using illustrations, sculptures, and videos to present an ancient sea world that has already disappeared. Science fairy tale writer YANG Yang has seamlessly combined science and literature by using her vivid imagination and in-depth research to tell stories to everyone.